Geico Brings Back Old Ad Characters for Movie-Themed ‘Sequels’ Campaign, With this crew, once is never enough

Pinnochio’s back, and that’s no lie. The truth-averse knot-head returns today, along with some familiar raccoons and woodchucks, in an amusing movie-themed “Sequels” campaign devised by The Martin Agency for Geico.

Of course, Geico blazed the nostalgia trail as 2019 began, airing some of its most beloved ads from as far back as 1997, in a move that generated considerable buzz. Now, the three aforementioned icons reprise their zany roles in brand-new commercials. None of the characters have appeared on TV since their original commercial runs. (That’s 2010 for the woodchucks, 2014 for Ol’ Nosey and 2016 for the raccoons, though the masked critters headlined a social push more recently.)

Pinocchio screams a lot, and for good reason, in this zippy campaign trailer:

Luckily, Mr. P’s leg returns, and his wooden performance might just grow on you in these spots featuring a rom-com put-on and brush with the law:

“We explored a number of approaches for communicating ‘sequels’ and alluding to the originals,” Martin Agency creative director Neel Williams tells Muse. “It was a bit of a brainteaser. Ultimately, we landed on a movie-like opening super, and then a closing voiceover to tie things together.”

Next, the raccoons hijack a garbage truck, and then try their paws at food service. That should end well:

Finally, the woodchucks do what they do best—and send-up commercial tropes in the bargain:

“During the ‘Best of Geico’ campaign, we saw a lot of social chatter about fans’ favorite ads that didn’t get brought back,” says Martin creative director Justin Harris. “Pinocchio, woodchucks and raccoons were all mentioned. And by keeping the story going for a second and third installment, we’re able to give ourselves a much longer runway to develop a narrative or really dig into a joke. On the original Pinocchio shoot, Neel and I always wanted to do some physical comedy with his nose, but it would have been forced in that particular ad. Hello second—and third—chances!”

Fans are invited to visit this site and vote for their favorite Geico sequels. What’s more, branded movie posters will appear in the “coming-soon” boxes of theaters nationwide (see a couple of examples below), and folks can win commercial props through an upcoming sweepstakes. (We want that leg, dammit!) 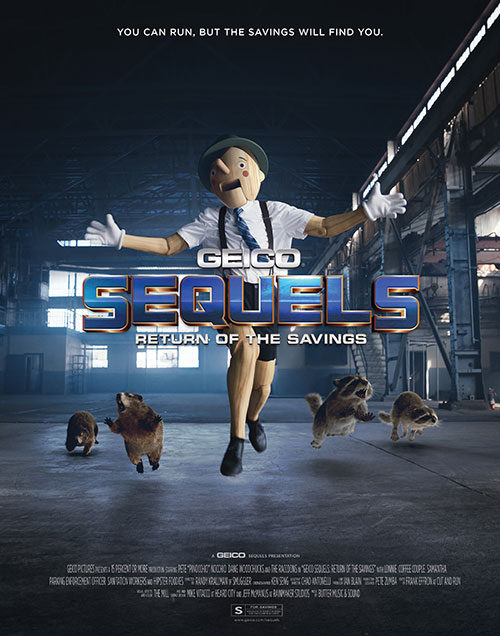 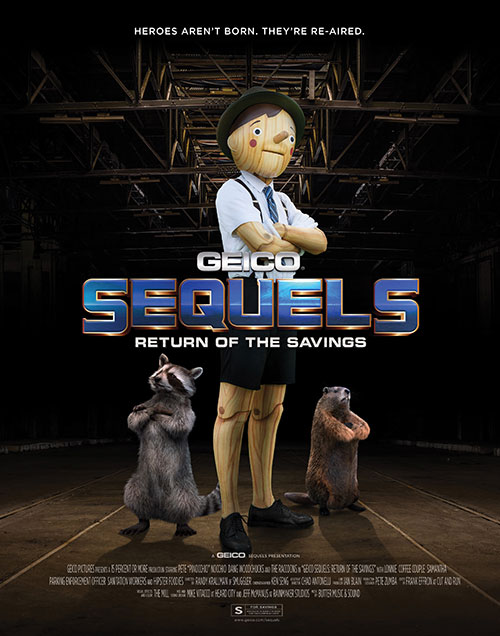