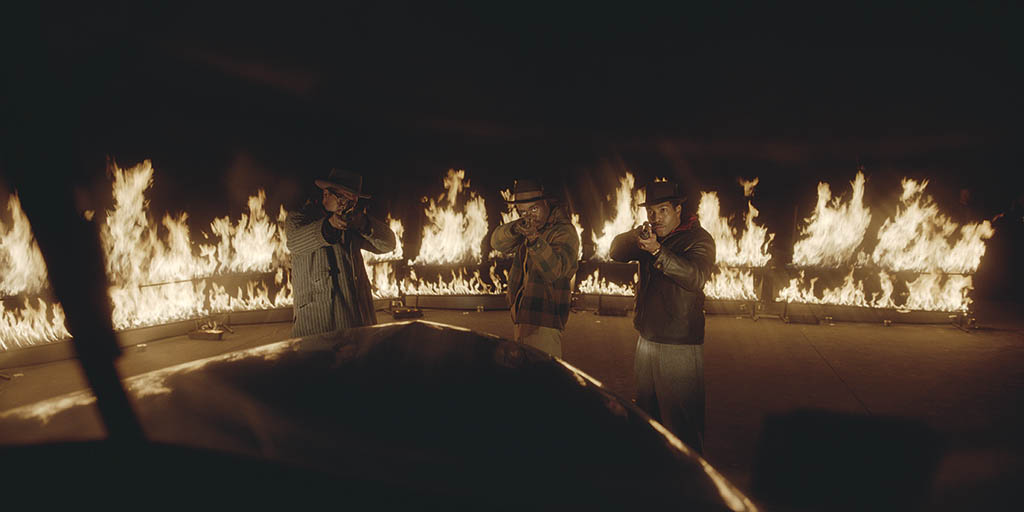 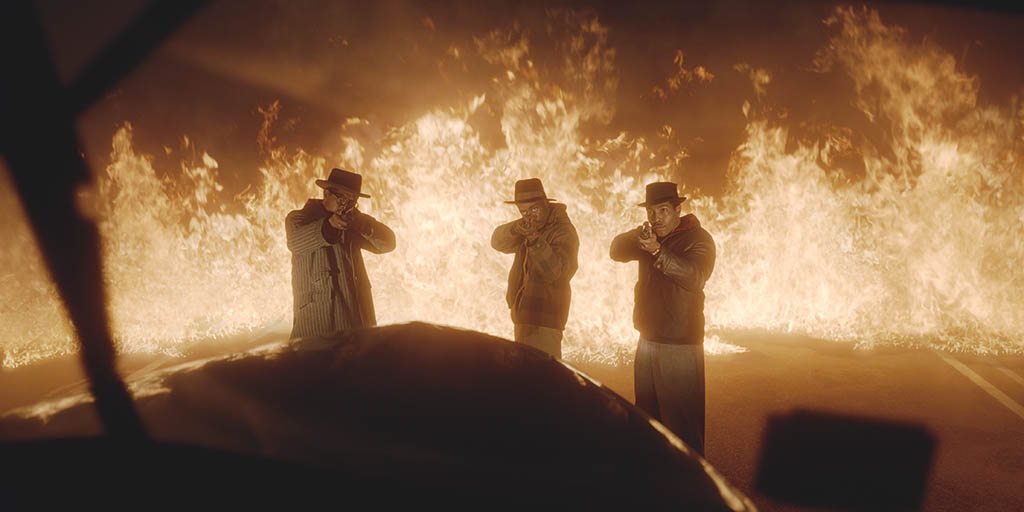 A ring of fire is augmented to make it appear more dangerous in Episode 404 of Fargo. (Images courtesy of Zoic Studios)

“The photogram technology has evolved to the point that it is solid. [Data wrangler] Rebecca [McKee] blew people’s minds on set by showing them the models of the rooms that we were standing in. It’s a newer tool that has helped with visible and invisible effects. If we need to get rid of the picture on the wall it can be replaced because we have a model of it.”

In the past, invisible effects were associated with rig removals, set extensions and environmental clean-up. However, the advances in photorealism and drone photography have expanded the scope to include digital doubles and what used to be considered physically impossible shots. The ultimate goal is for audience members to get lost in the storytelling and the world building rather than drawing attention to the work of digital artists. Invisible effects are not going to disappear as CGI has become an accepted part of cinematic language even for independent productions and television sitcoms. Veterans of film and television projects share various insights into the past, present and future of what remains as the bread-and-butter work of the visual effects industry.

“One of the things that I’ve come to rely on are my HDR acquisition tools. Except for specialized cases I don’t hold up production anymore to go out with shiny and grey balls, and a color chart. My camera assistants have the color charts and pop them into the camera at the beginning. Occasionally, I can line up color based on skin tone and other things. I use the Ricoh Theta to do all of my HDRs. I can set my brackets, walk out, everybody clears, and I’m there for a minute at most capturing the full scene and all of the lights in it. If there are light patterns I have them turn the lights on and off. You’re not going to LiDAR every set because with a TV schedule and budget you don’t have that luxury.

“On ‘Legion’, I always knew that we were going to have surprises in post, so my incredible on-set data wrangler, Rebecca McKee, would walk around and photogram everything. She had a high-powered laptop and used RealityCapture to build models of every set and location. We definitely used them. The photogram technology has evolved to the point that it is solid. Rebecca blew people’s minds on set by showing them the models of the rooms that we were standing in. It’s a newer tool that has helped with visible and invisible effects. If we need to get rid of the picture on the wall it can be replaced because we have a model of it.”

“It’s been a lot of improving on what’s already existed, such as the fidelity and detail that you can get out of LiDAR and photogrammetry. Photogrammetry takes a lot of processing power, so refinement of the computers computing like the cloud and just having more resources to crunch the numbers continually gets a lot better for us.

“In the mid-1990s, when doing a set extension, people would say that the only way possible is with a locked-off camera and to do a single matte painting. But filmmakers want their big moving cameras, so you need more 3D environments that look photoreal. The set extensions need to be at a higher level of quality and believability, so we have to up our game on how we create them.

“It’s a necessity more and more that you need a camera in an environment to help every other department. Even the 2D is made infinitely easier if we have a digital camera that matches the practical one. A lot of what we do with the LiDAR scanning isn’t always to recreate 3D objects. On ‘The Haunting of Bly Manor‘, all of the interiors were scanned for a dual purpose. We needed to see through the windows from the outside. Also, if we have the geometry for the exact interior, it becomes a lot quicker for that camera track to solve because you have the entire room.”